Knowing how to get rid of June bugs would help you deal with those beetles right away. That bug is usually a half or one-inch-long with a reddish-brown color.

June bugs are harmless to humans. However, it is going to be a different story when the beetles come to a landscape or lawn.

Even though they do not attach people, their sticky legs would get you a shiver especially when a June bug clings to you. You might also find them on a tree.

Therefore, you want to remove June bugs, right? Well, there would be helpful information and a guide for you to deal with those flying bugs. After that, they will not bother you anymore. So, let us get to it.

What Are June Bugs? 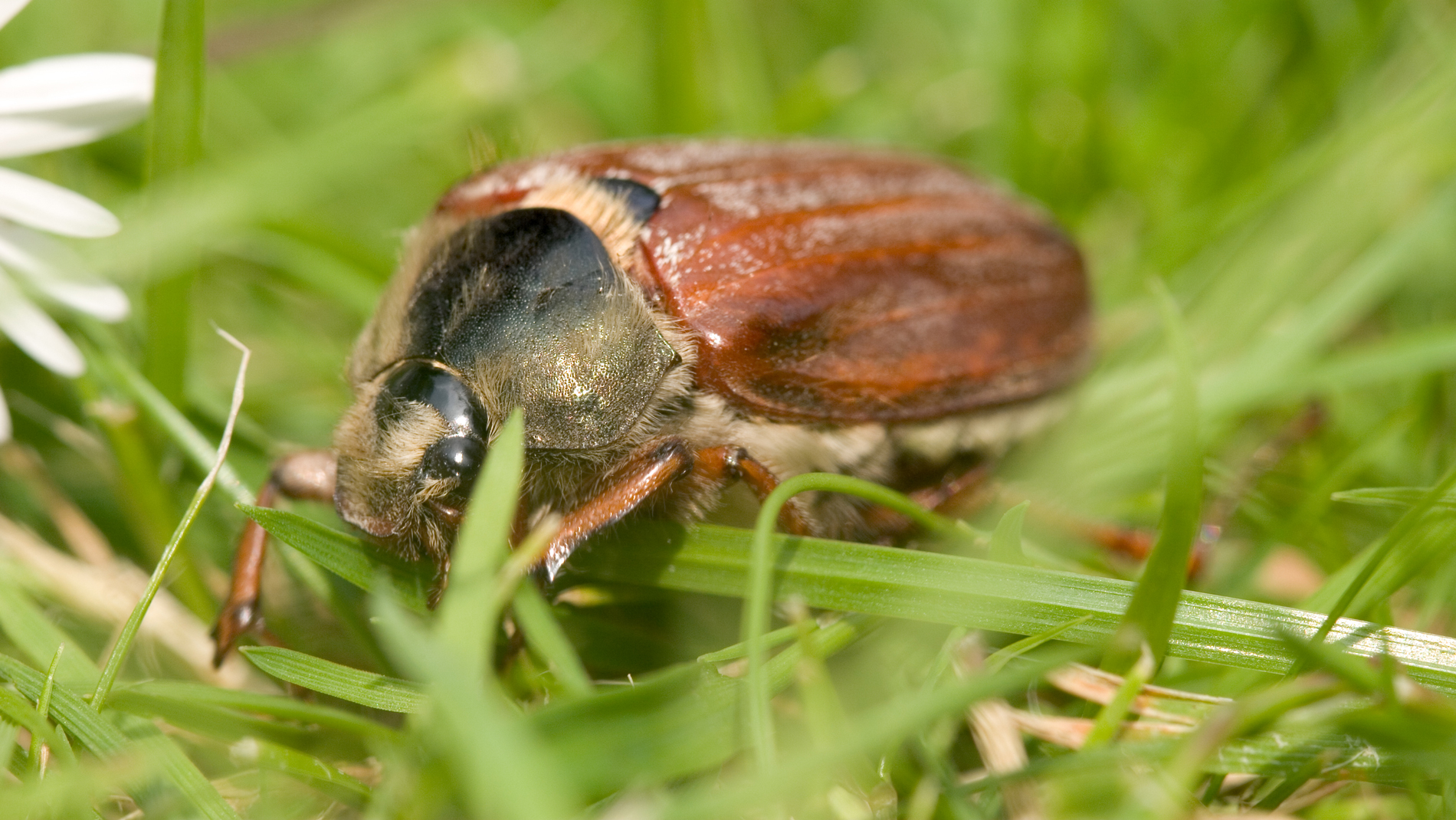 The very first information people need to know is about the June big itself. These flying beetles are one of the pests that come and go quickly. When they come, there will be destruction.

June Bugs or Phyllophaga Longispina is also known as June Beetles. The name does not refer to only one species.

It becomes the nickname to many kinds of Invaders during June (or sometimes May). Those invaders are:

All of those invaders or bugs share the same characteristics. When you are unlucky enough, you may get to deal with more than one species at a time.

Because of its similarities, there plenty of solutions you can apply to get rid of them. 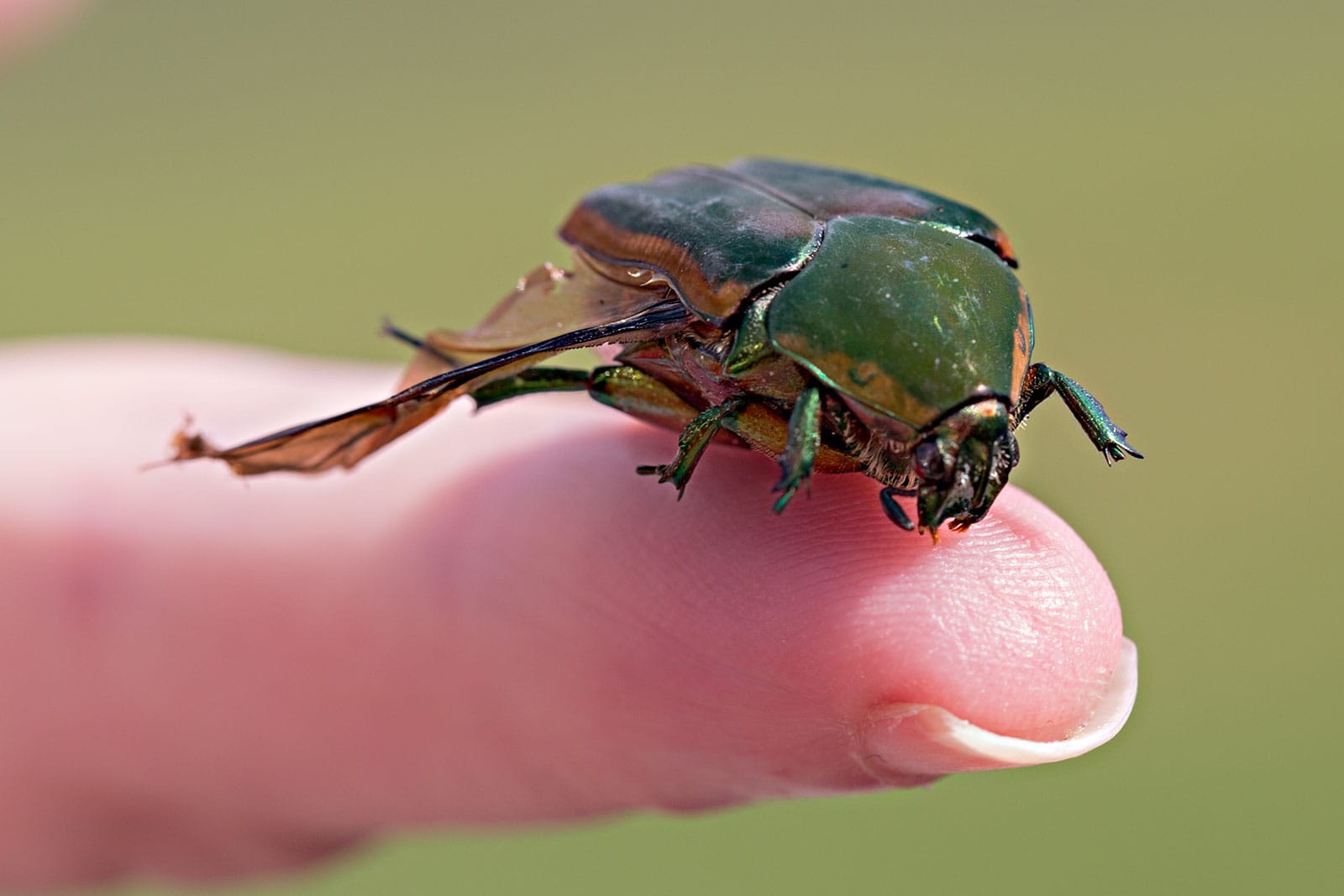 Since they are members of the Scarabaeidae family, June Bugs are also thus all scarab beetle species. They are poor fliers, plump, up to two inches in size, and vary greatly in color.

You may see them in striped patterns, dull caramel, or metallic green. 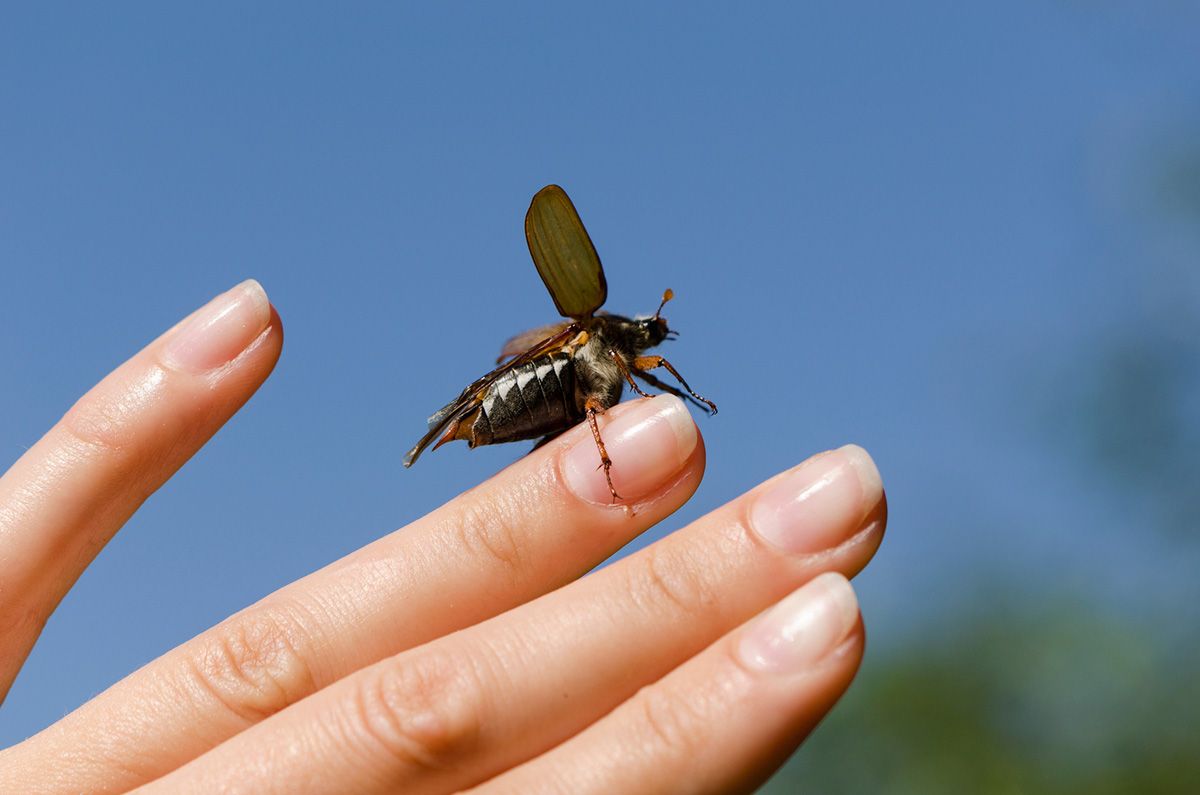 Even though these bugs have wings, that does not mean they can fly just like birds or bees. June beetles are like flying without navigation.

They do not know where to go and often bumping into things in front of them.

June Bugs are poorly-suited for flight. That is why it would be very disturbing having so many of them around.

The bugs will choose to stay on the ground after getting a good food source. When they see light, it is time to hide the clumsiness in the air.

That situation would be very disturbing. Thereupon, it is important to get rid of June bugs as soon as possible.

What do June Bugs Eat? 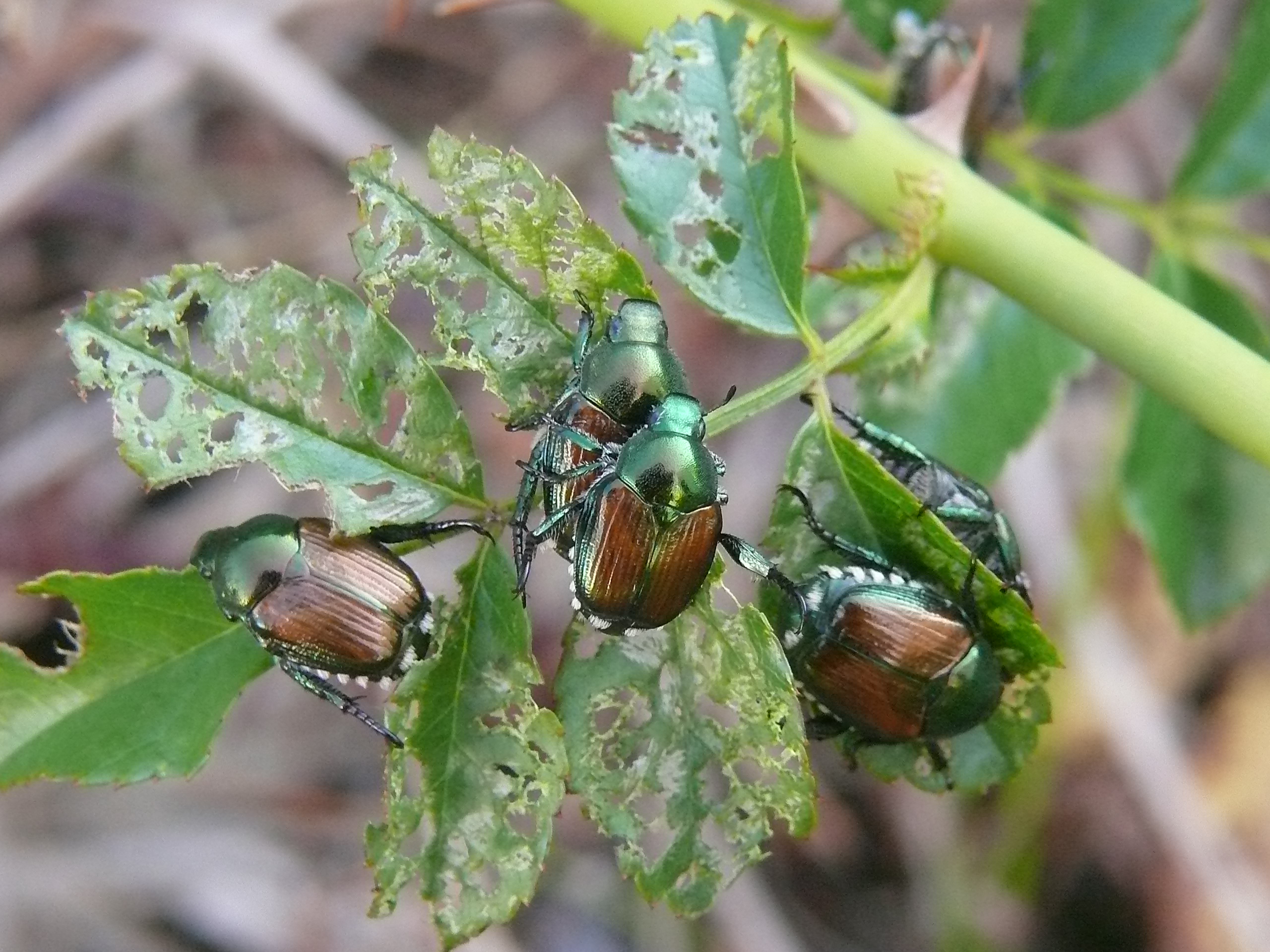 During the Larvae stage, they like to eat root. This stage would ruin the lawn or garden right from the ground. The adult June bugs would like to eat the leaves and vegetation or fruit trees.

In another case, the Japanese beetles are likely to eat the crops like maize and strawberries. These bugs are so dangerous. They can even devour the plant right at the flower. 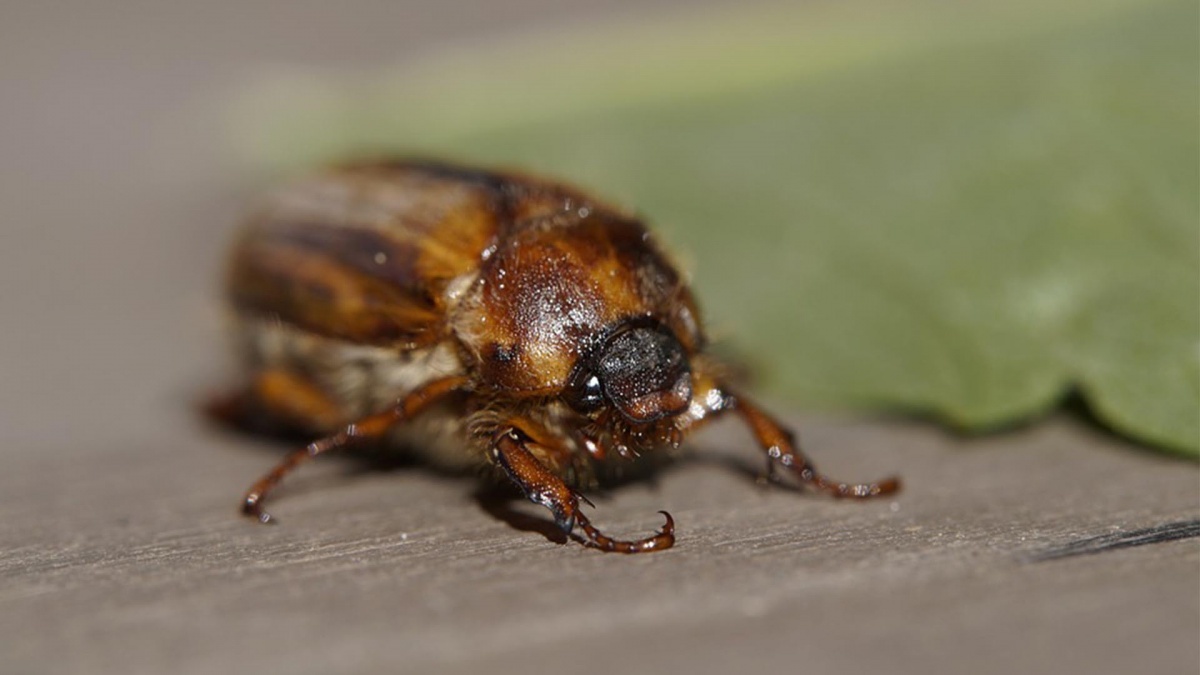 As said before, June Bugs are harmless. It bites no one. Indeed, these beetles can be very timid too. However, they have spined legs which sometimes people think is a bite.

What June Bugs Are Attracted to? 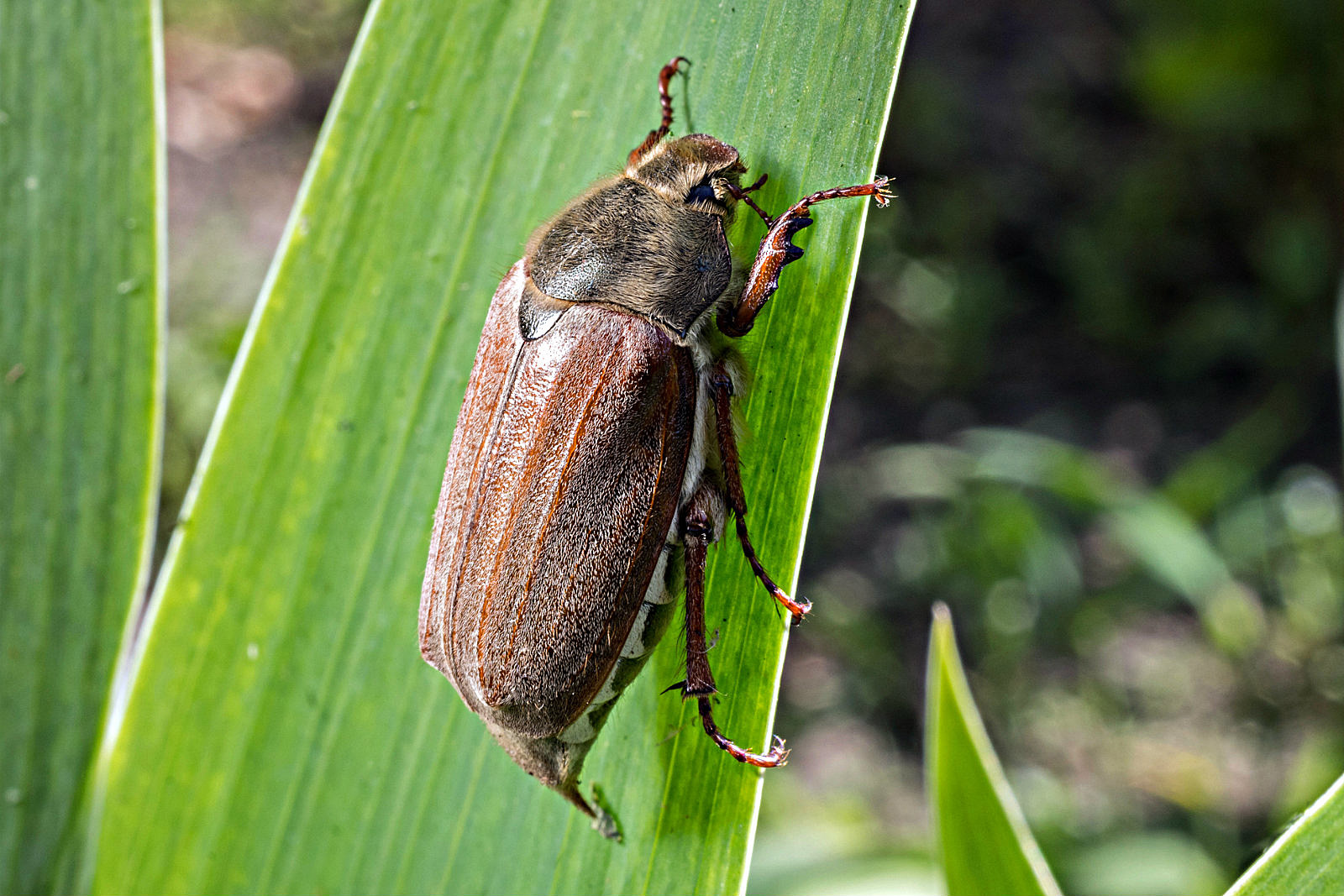 It is very obvious, these beetles would love to go on lawn or landscape. They are attracted to flora. Actually, June Bugs love to light the most.

The bugs would swarm around the garden lights or a porch with lamps during the night. They all would gather around the light and prefer to eat anything nearby.

The Life Cycle of a June Bug 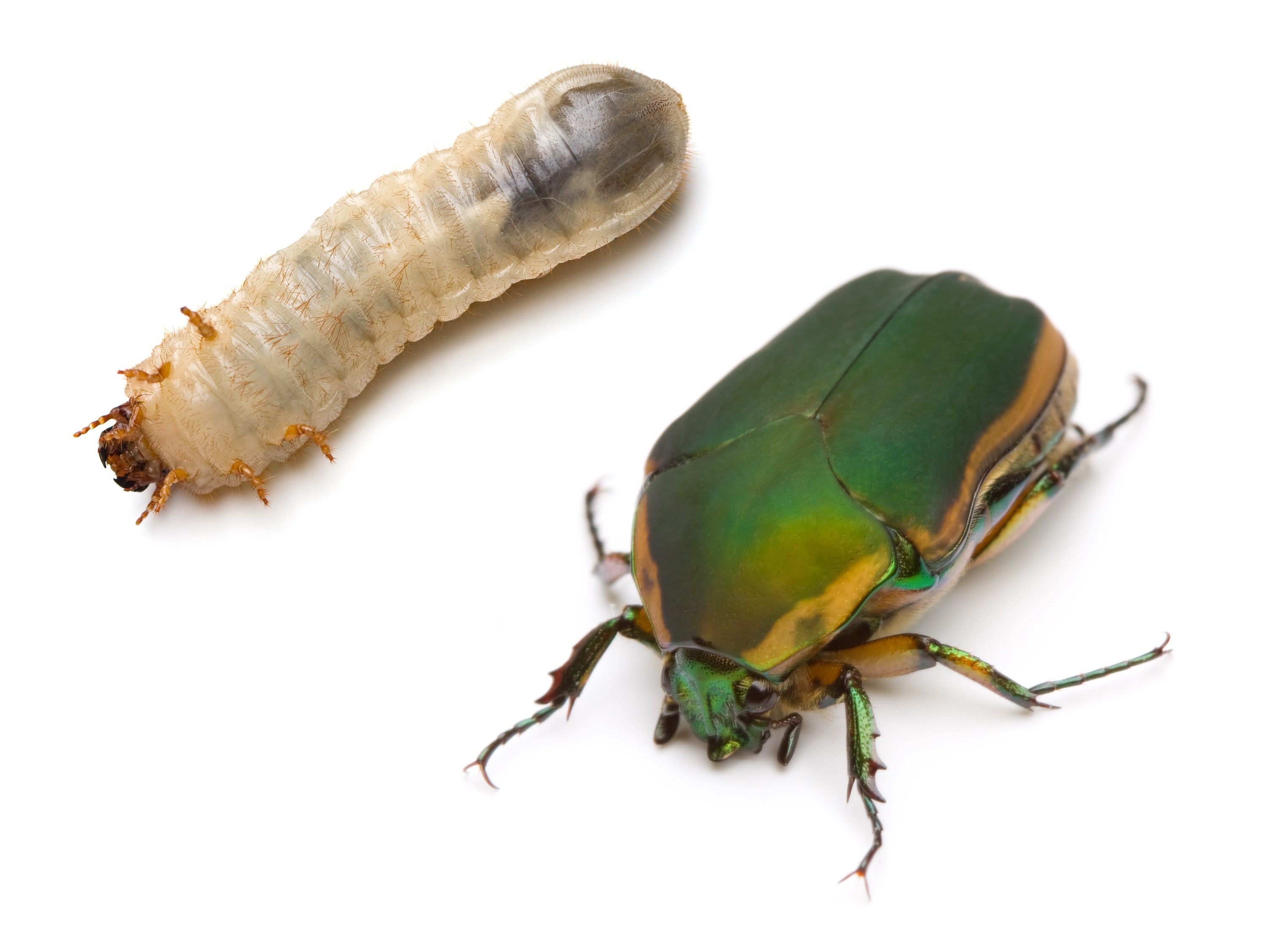 Knowing the life cycle of any pests in your garden is important. This knowledge will tell you all about the stages and the best time to get rid of them.

For June Bugs, you have to know that the adult would lay a lot of eggs about 75-100 pieces underground.

It would occur in early to midsummer. The eggs take about 18 days to become larvae which are legged worms with brown heads. Their size is about one inch. At this stage, larvae can be so destructive.

These legged worms can be underground for a long time, one to three years. During that stay, they will be devouring the roots through three molt phases.

In the winter, the larvae would hibernate by going deeper into the soil.

They become active again when spring comes. The final phase of the larvae stage would be a transformation to pupae.

From that, there will be new adult beetles in the spring season. After that, the cycle repeats itself.

For those of you who were getting annoyed by a bunch of flying June Beetles on the porch or lawn during the Summer season, that is only the beginning.

Those adult bugs would soon destroy the yard and landscape nearby by starting the life cycle over and over again.

Their life cycle would take years to process. It depends on the species of the beetles. The stages may take about 1 to 3 years.

Further, the reason to know how to get rid of June Bugs is not all about getting rid of the beetles.

It is also about making your evening in the outdoor more pleasant. Then, the lawn and garden in your house are safe from pests. 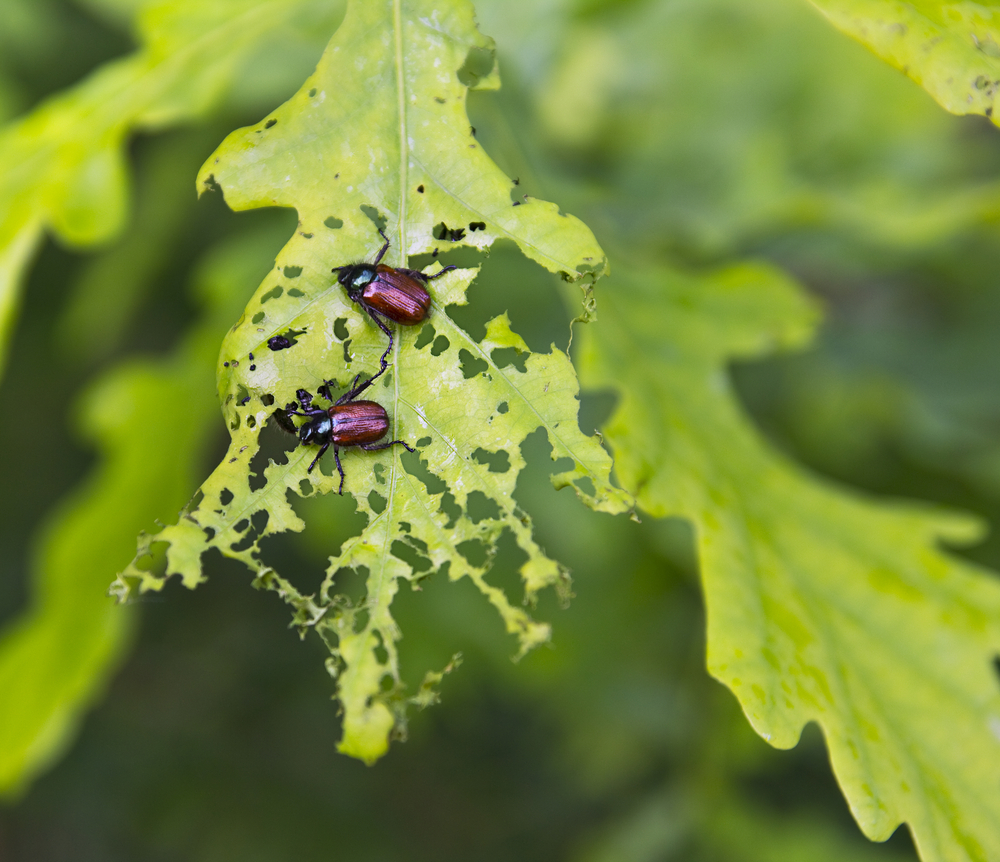 There are some signs that tell you that the June Bugs and their grubs may have invaded the lawn or garden. Here they are:

There will be some large patches of dying grass. Then, you can even lift the grass so easily because it is probably loosened.

The holes may come from raccoons, skunks, armadillos, and some other animals that are searching for grubs to eat.

Keep an eye on your house landscape. Check for such signs. If you see one of them, you may need to follow it up for a confirmation of the existence.

To confirm the presence of the grubs, you just need to dig some holes in the lawn.

Then, check for the grayish-white bugs that look like a caterpillar. When you see it form a “C” shape, that is your confirmation.

For the June Bugs, you can confirm its presence by walking on the lawn and inspecting the leaves.

How to Get Rid of June Bugs 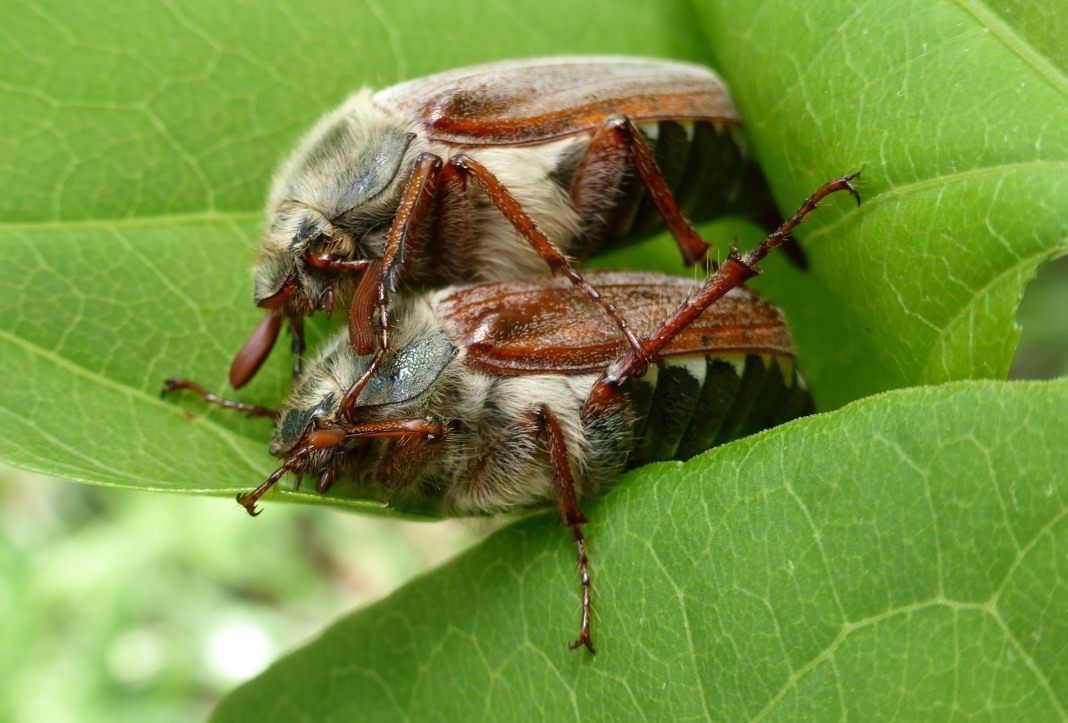 You might choose several techniques to get rid of the June Bugs. Since it has similarities to many pests, the solution to these problems would be endless.

To get you out of confusion, you do not need to explore plenty of methods on the internet.

This part will present 5 ways. These methods could be the best ones for you to get rid of these pests easily.

Generally, the infestation made by June Bugs does not need serious remedies. In a healthy lawn, there are only 5 to 10 grubs that a per-square-foot area can support.

Therefore, one method to get rid of these beetles is to make some kind of trap.

A certain number of grubs per square foot would indicate how many adult bugs you will have during the evening in the landscape of your house.

That will begin in the summer season. So, just trap them before the summer hits.

Use a mixture of molasses water, a half-cup each. Then, have it in a narrow-necked container. Besides the homemade version, you can also buy the ready-made product from the store.

Further, the mixture would lure and trap the bugs in the container.

This method is about trapping the adults in order to stop the reproduction of the life cycle of the June Bugs.

However, this solution is only effective for a lawn with a small number of grubs. If your place has a larger situation, this way will not work well. 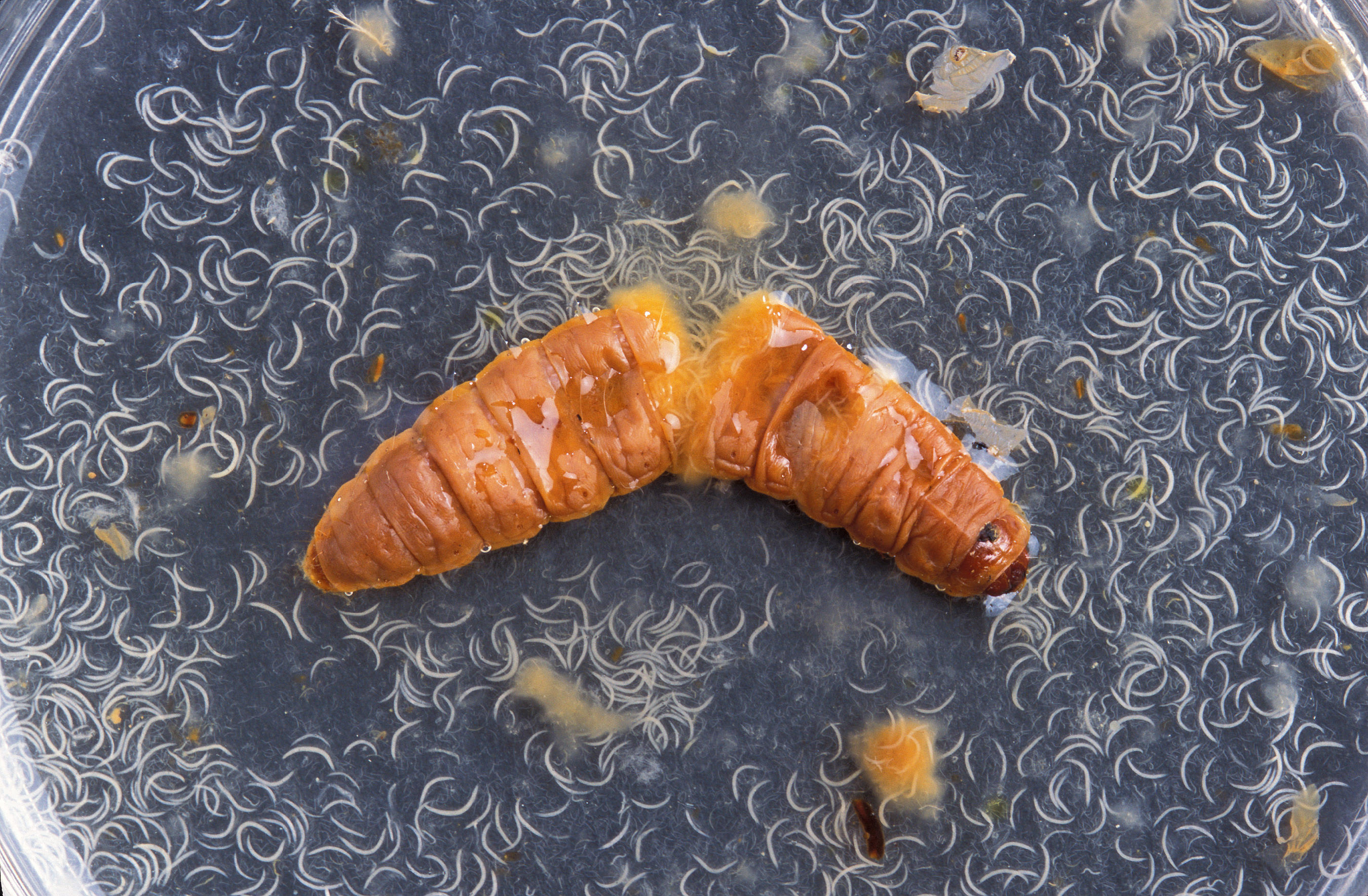 It is microscopic soil worms that would eat larvae underground. This solution becomes popular as the natural control for pests.

There are so many species of nematodes. The one that would deal with the June Bug’s grubs is Heterorhabditis bacteriophora.

Then, the right time to apply nematodes is during the active time and presence of grubs. A lot of regions would go during midsummer to late summer.

It is not going to be good when you apply this method too early or too late.

To apply, you need to have the nematodes in a garden sprayer. Then, spray them all to a wet lawn in the evening.

Right after that application, you have to water them to get the solution drains well into the ground.

The application should be once in two or three years to control the grubs fully. When you use and apply the nematodes properly, they would be a great natural solution to control measures. 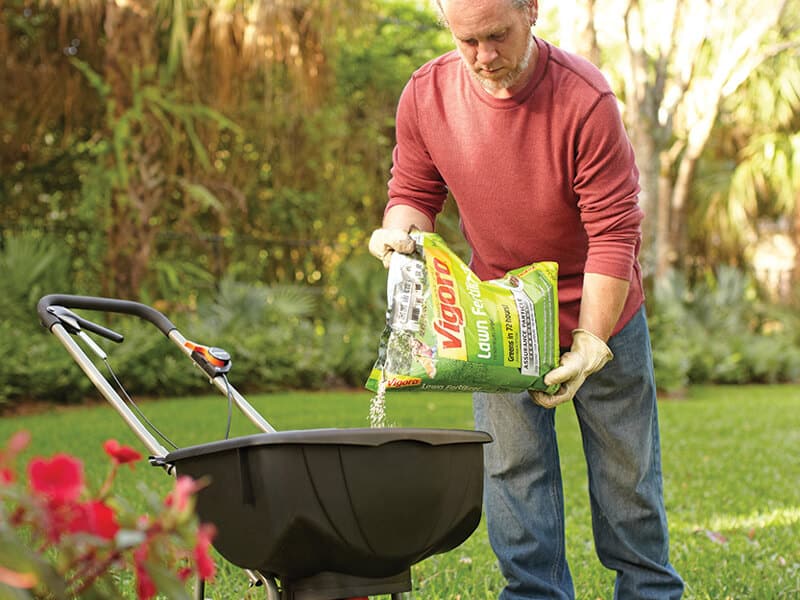 This method is organic because it uses a bacterium to control a lot of various grubs. Using milky spores to get rid of June bugs is not as popular as the beneficial nematodes.

However, this one is well-known as the effective grub-control measure.

Milky Spores application on a lawn is not recommended for norther climates since the soil condition is not ideal for the bacterium. Milky spores prefer a fairly warm one.

A good time to apply Milky spores is in the Fall season. That is the phase where the grubs are probably close to the surface.

In the spring or summer, the soil will be too dry. It will not be effective for this method.

Just mix the spores with water and use a sprayer to apply. It would take several years through repetition to deal with the severe infestation on your lawn. Thus, there is no need to use chemical products. 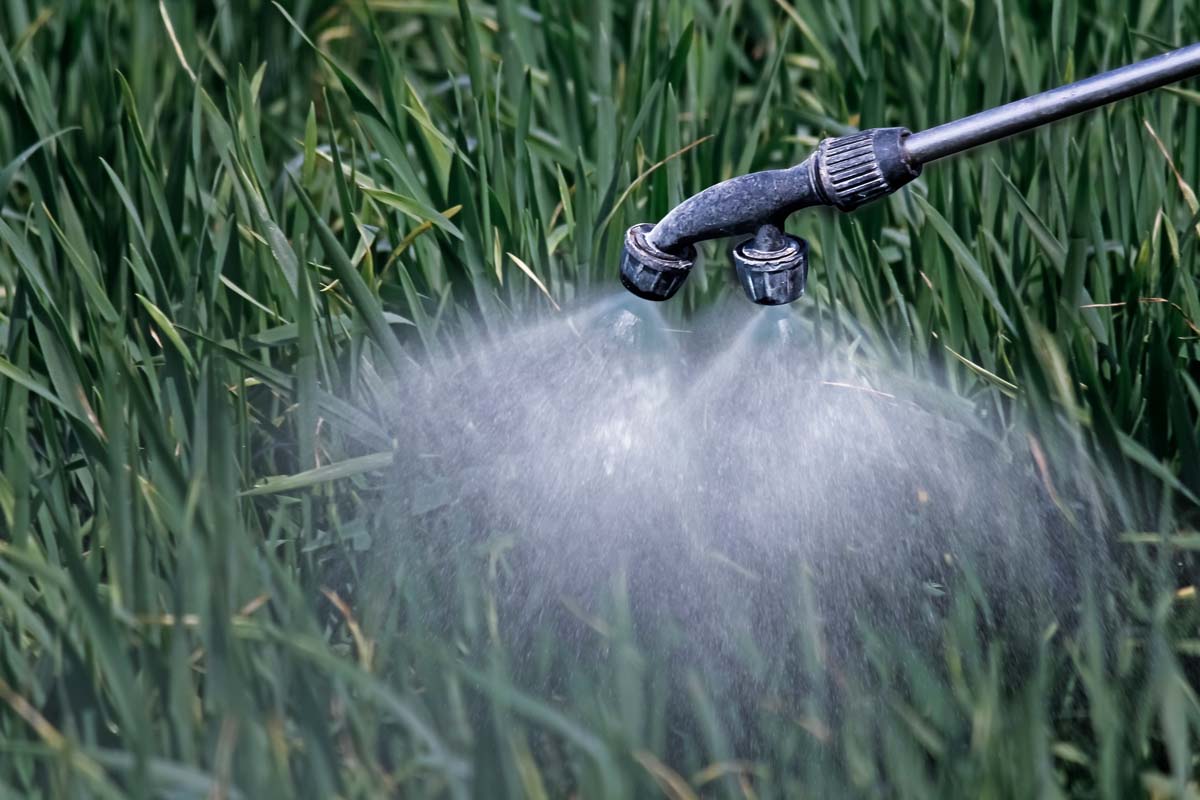 Besides all of the natural and homemade solutions, there are always chemical products available on the market.

Even though people always recommend avoiding them, in some cases, those kinds of remedies may be necessary.

If you want the most effective insecticide, it would be the one that contains trichlorfon or carbaryl. The grubs that contact with these chemicals would be dead.

Thereupon, it will prevent them to get into the pupating phase.

The ideal time to apply this curative insecticide is very specific. September is the right month for application. Why? The grubs will be close enough to the surface and the solutions will be effective.

This insecticide is called curative because it kills June bugs in all the life cycle stages. In September, the insecticide application will kill about as many as 80 percent of them.

Do not forget to read the instructions before applying. You have to water the insecticide thoroughly.

This method will help to reduce the hazard. You have to know about the chemicals in detail and use it very carefully and responsibly. 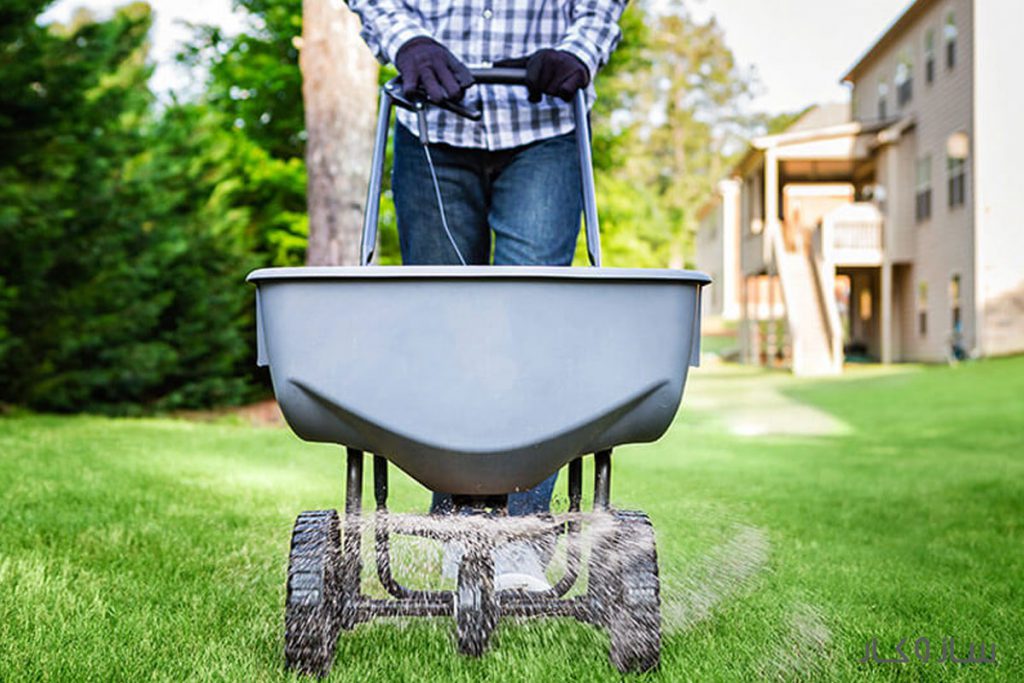 This method is slightly different from the previous one. The preventive insecticide means this chemical will only kill the fresh grubs that have just hatched from the eggs.

Additionally, the product should contain thiamethoxam, chlorantraniliprole, imidacloprid, or clothianidin.

Since it is a preventive one, you have to know that this solution will not kill the mature grubs, pupae, eggs, and burrowing beetles.

The application at the right time is very important. Do not be too early or too late. It would not be effective.

After reading the methods of how to get rid of June bugs and the other information, you now know what to do. Deal with them as soon as possible and save your landscapes.