Understanding bell pepper plant life cycle becomes one of the most important action prior to planting it in your vegetable garden.

Being part of the Solanaceae or nightshade family, this kind of plant is also the member of Capsicum genus.

And all of Capsicum plants generally share the similar life cycle including germination, growth, pollination, fruiting and ripening.

Thus, in this article, you are going to be directed to check out the complete review of the life cycle of bell pepper plants which includes the seeds germination, the plants growth, the pollinated flowers, the plant sets fruit, the fruits ripening and the conclusion.

So if you are going to grow bell pepper plant on your vegetable garden, don’t miss every single part of this review. 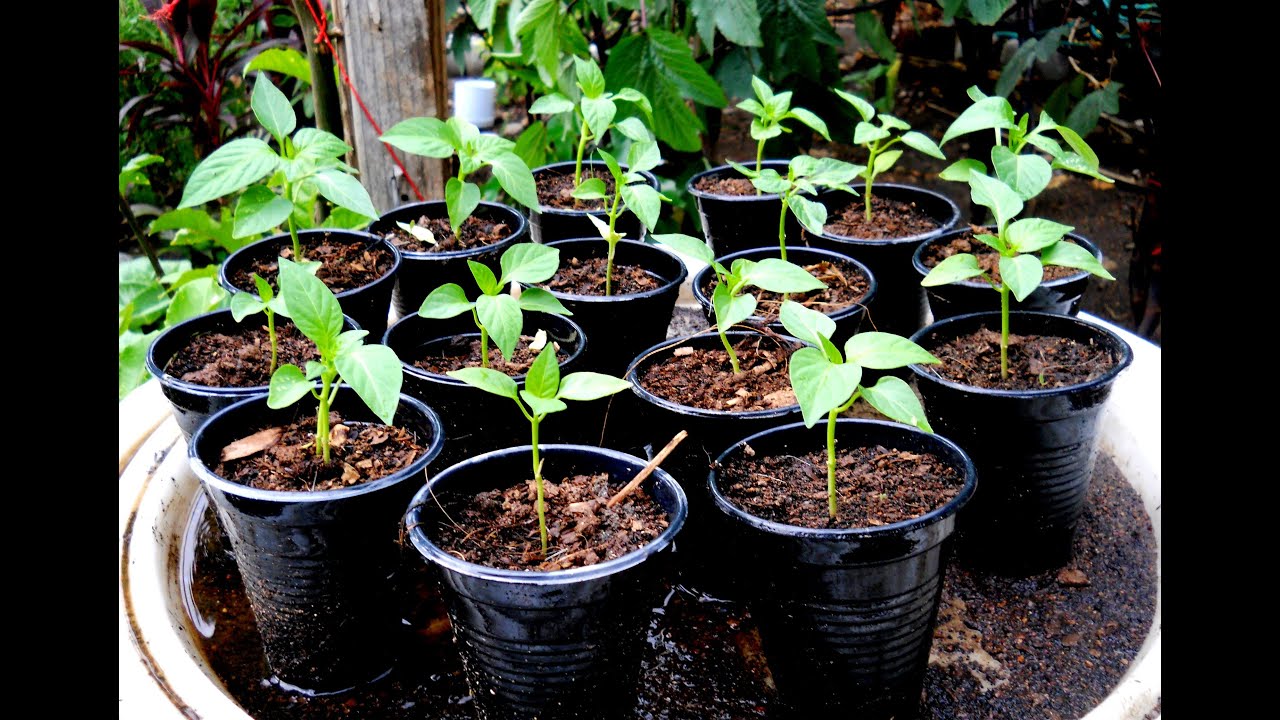 That involve the way you grow seeds well in warm soil and temperature.

That is due to the fact that bell pepper is the tropical plants, meaning that the plants will grow much better in warm soil as well as temperature.

In this case, the average temperature is usually between 75 and 85 degrees Fahrenheit.

Thus, the plants will just work out to grow best along with the optimum temperature around 85 degrees.

In germinating the seeds, you must provide about ¼ inch of moist soil to cover the seeds.

Believe it or not, even the healthiest seeds of bell pepper still germinate slowly. Some seeds need a week or 10 days but others can take as long as four to six weeks for germination.

Note, when they firstly grow, they will come with the two long pointed leaves.

Growth of The Bell Pepper Plants 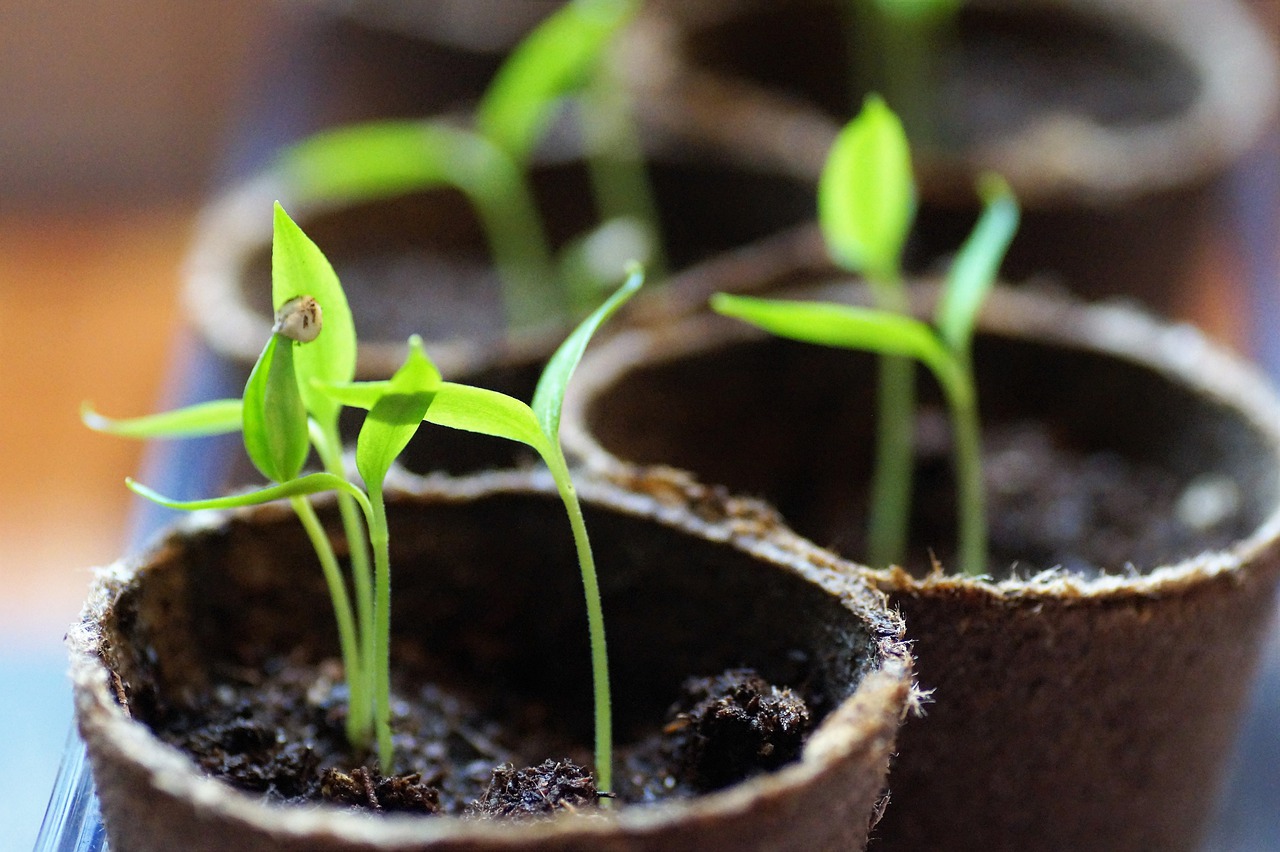 In case that the germination process of bell pepper plant needs a slightly long time, most of the gardeners who live in a cooler climate decide on planting the seeds on pots.

This way, they plant and start growing the seeds indoors. Typically, the gardeners will use a starter trays to start the bell pepper plant life cycle.

As the seeds have been planted in a pot for six weeks after the emergence, the seeds grow into plants with a root system which is large enough.

Thus, the plants have the proper seedlings that need at least a 4 inches across pot.

At eight weeks, the bell pepper plants will come up some leaves so you can transplant them to your vegetable garden.

For the plants prosperity, warm weather is a must. It is highly recommended that you don’t put them outside until they are two weeks after the average last frost date.

If you plant the seeds in a cool spring, keep them inside until the temperature of the daytime gets at least into the 60s.

Well, the way you start growing the seeds is important since it would support the way the plants grow in your vegetable garden. 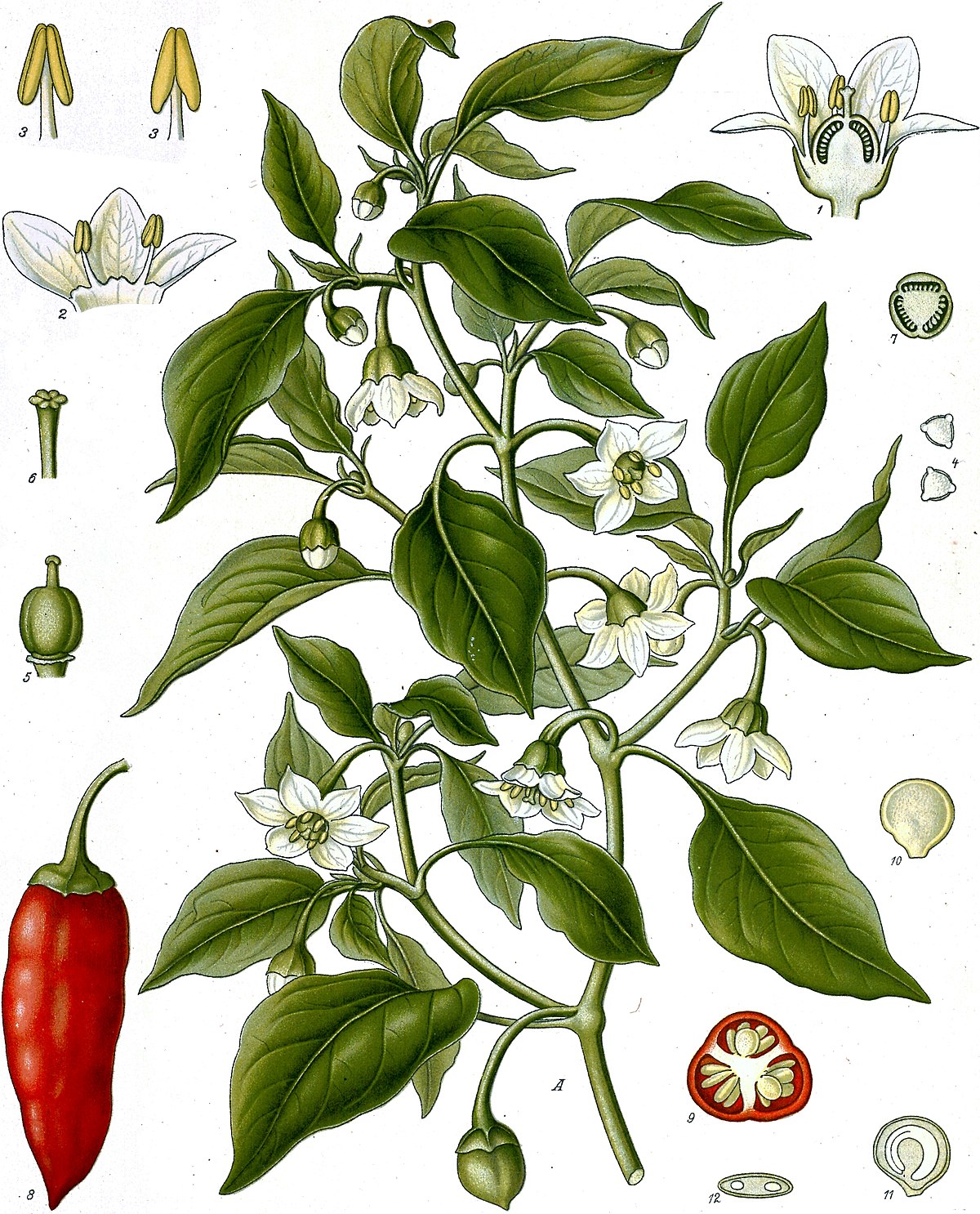 The next bell pepper plant stage is the flowers pollination.

Simple to understand, to continue the life, the plants need to go through flowers pollination.

In the other words, the flowers of the plants need to be pollinated.

Some kind of bell pepper plants do self-pollination while other types do cross-pollination.

In self-pollination, the plants are able to pollinate by themselves by dropping the pollen directly from the anthers to the stigma.

However, when the flowers are visited by insects, they can do such cross-pollination by taking the pollen from one flower and bring it to another flower.

Once the flowers are pollinated, the ovary of the flower will also be fertilized. This means that the bell pepper plants are ready to set fruits.

In this stage, the ovary grows into a fleshy pericarp enclosing two or more locular cavities. This way, the pepper’s pericarp becomes the edible walls of the ovary.

Then, the pericarp grows and thickens to form the bell pepper. Meanwhile, the locular cavities are the hollow areas insider the bell pepper in which the seeds from.

If you have some bell pepper at your kitchen, then you could cut it to see and check out the parts of it. 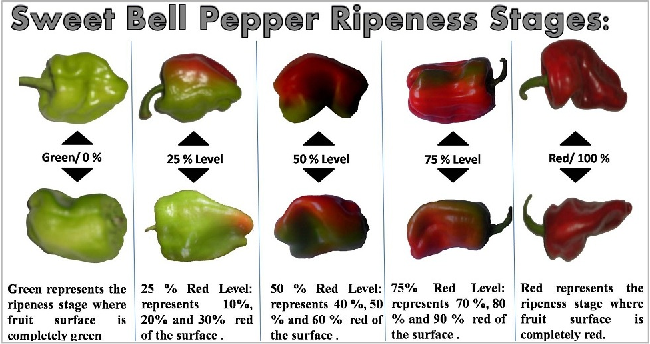 Look at your bell pepper plant life cycle now! Are the plants bear fruits growing to their mature size? If so, it means that the fruits begin to ripen.

Note, immature bell peppers are always green while the mature ones are yellowing. So it would be easy for you to recognize when the fruits are mature enough to pick up.

These conditions means that you can harvest the fruits already.

When it times to fruits ripening, keep in mind that pepper chlorophyll also breaks down, causing the pepper change its color from green to its mature color.

Well, it can be from red to yellow, orange and even purple. But yellow is the common color for a mature bell pepper.

If the bell pepper is an open pollinated variety, you can plant the ripe seeds to produce the nest peppers generation.

Simple to understand, ripe seeds from an open-pollinated pepper can be planted again to plant the next pepper plants.

Sweet bell peppers typically needs 60 to 90 days to gets their maturity while the hot peppers vary.

Even some varieties needs 150 days to gets their maturity.

This range starts when you transplant the seedling. Well, growing plant from seeds generally take another eight to ten weeks.

However, as it is mentioned, all depends on the types or the varieties of the bell pepper. In this case, certain types of bell pepper plants along with the proper care and climate conditions will live up to a decade or even more.

A stable warm climate is a vital factor to determine how long the bell pepper plants life span. Believe it or not, a cold snap or frost a few degrees can cause the plants to die.

Over wintering a pepper plant will also be a burdensome especially if you have a lot of plants growing together in the vegetable garden.

Therefore, providing stable warm temperatures year-round will help you extend your pepper plants’ life expectancy with the normal period which is one to three years.

Before you start seedling and growing the bell pepper plants, knowing its life expectancy is also vital to convince you that you can grow the plants well.

Due to the fact that the bell pepper plant life cycle and life span is much depending on the types, here are the five key types of pepper plant or Capsicum you need to know:

These different types of pepper species can actually grow year-around for years as long as you set them in a proper climate, nutrients and care.

However, each of them can have a different life expectancies like you would see in the table below:

So now you can determine or at least predict the life span of your bell pepper plants by seeing which type of your pepper plants is.

Based on the table above, bell pepper from Capsicum Pubescens types is the plants with the longest life span you could expect.

You can find mostly Bell pepper from Capsicum Pubescens in Central and South America.

These varieties include Manzano and Rocoto peppers that come with the rounder shape that is like apple rather than chili peppers and juicer than the other type of bell pepper.

Though this kind of bell pepper live longer, they are less grown and cultivated due to the fact that they are too finicky.

Moreover, they are difficult to cultivate. The takes long time to grow to reach their mature size.

Further, they are also one of the most weather hardy pepper plants for surviving in a colder weather compared to the other type of bell pepper plants.

This way, the plants continue to produce peppers throughout their life.

However, there are some wild bell pepper plants recorded as living for more than a decade. In this case, they can even life for more than twenty years.

Chiltepin pepper os one of the native to North America and considered as the type with the longest living.

The Chiltepin bell pepper is a member of Capsicum Annuum family. It is exceptionally spicy and thrives in the wild.

Believe it or not, it is reported as the bell pepper that can live up to 30 years.

Bell Pepper with The Shortest Lifespan

Generally, a member of Capsicum Annuum has the shortest lifespan. It is the most common type of pepper variety to garden and include bell peppers, sweet peppers, cayenne peppers and jalapeno peppers.

These kinds of Capsicum Annuum family are usually replanted every season as they have the shortest lifespan.

They do not produce well after their first season. They also lose their texture and flavor. 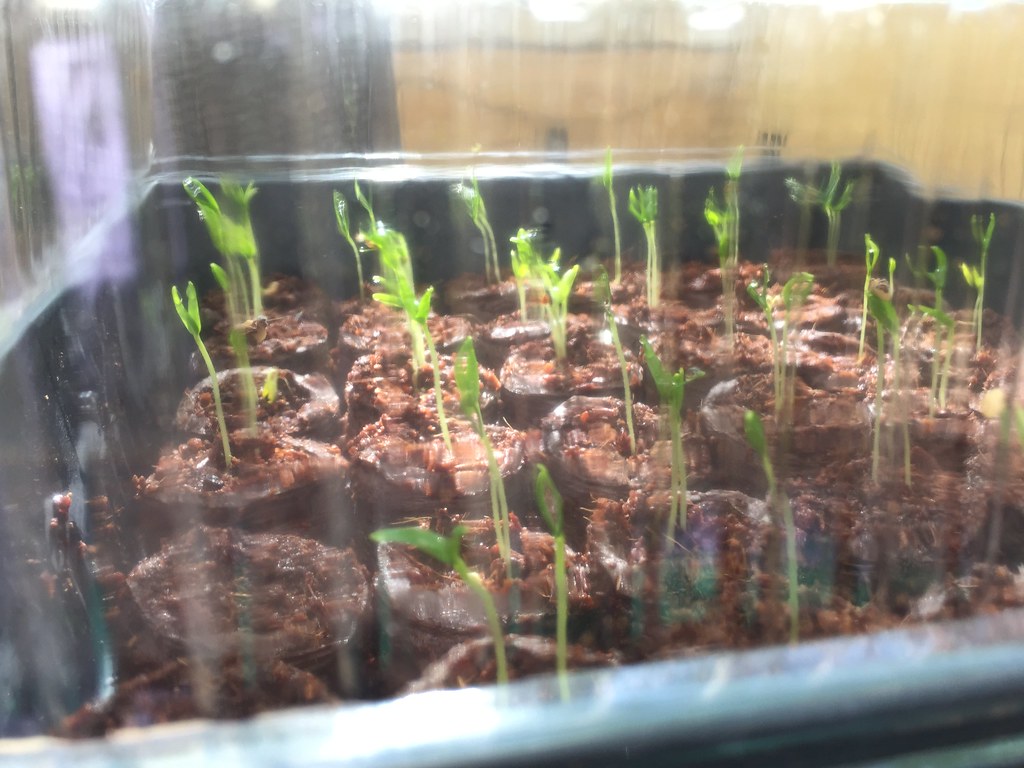 Actually, it is much depending on the varieties. An indoor bell pepper can even live up to a decade long.

If you grow bell pepper plants from seeds indoors, you can give the plants such consistency to thrive a little bit better than transplanted them from outside.

As long as the climate is also consistent and you give enough care, you can keep them live in your indoor vegetable garden. You can even plant them alive for so many seasons.

We covered an article about how to growing potatoes indoor and it’s almost the same basic steps with bell pepper. You may check it.

Want to add bell pepper plants in your garden? Make sure you know well how long such plants will be able to live outdoors.

As it is mentioned, their lifespan depends too much on the weather and the climate in which they are grown.

If you live somewhere cold, the plants will be able to survive only in one season.

Bell pepper plants can live outdoors for so many years as long as the climate is warm.

This way, the plants are tropical and subtropical, needing warm weather to survive.

Capsicum Pubescens is the type of bell pepper which are the harder plants.

They can last several years with proper care and good weather.

Never overwinter the plants since it can cause them to die.

So if you would like to grow them in your vegetable garden, make sure you are living in a warm weather and know well the bell pepper plant life cycle.